“when you want something, all the universe conspires in helping you to achieve it.”

why do we do what we do every day?  we get up early, sit in traffic for hours on end on our way to work, to then turn around and go home after a long day and barely have enough energy to make dinner, or for me, to entertain my crazy bulldog who requires more attention than most humans.  then the weekend finally arrives and we spend our time running errands, standing in line and fighting traffic once again because you and thousands of others are all going to costco at the exact same time, on the exact same day. what the hell is it all for?  to work until you’re 65 so you can retire and then finally start enjoying your life. no thanks.

i get up every day and do what i do so i can give myself the opportunity as often as possible to experience those moments that literally take your breath away.  i’m talking about those special minutes, hours or days that you will remember for the rest of your life. the ones that you dream of, the ones that make you smile even on the gloomiest of days. i am lucky, i have had a few of those moments in my life and my trip to montenegro was one of them.  i have always wanted to visit this country on the adriatic and i wish i had a better initial reason other than when casino royale was remade and came out in 2006 the casino scene was shot in montenegro, and anyone who knows me knows i love james bond.  for whatever reason since then i decided i absolutely had to visit this country i knew nothing about at some point in my life.  as i was planning my conquest of europe i was hoping my final country would be montenegro so i could celebrate my 51st country like a total baller at the aman resort in sveti stefan but the stars were not alined for me (by stars i mean lack of trains and terrible bus and flight schedules) so montenegro became country 49….but as with james bond, those who know me best know that once i have something in my head i’m going to find a way to do it anyway, so 49 was going to be treated like 51, aman sveti stefan here i come.  49 is the new 51 and you only live once.

i arrived in montenegro’s capital city, podgorica, after a bus ride from hell from albania ready to be wowed….and wowed i was.  just the drive alone from podgorica to sveti stefan was filled with beautiful sights and breathtaking views.  it was coastal mountain splendor at its finest.  the stuff dreams are made of.  as i approached budva, sveti stefan’s partycentric neighbor (and where casino royale was filmed), the mountainous terrain gave way to bright blue seas and a setting sun.  nothing short of magic for someone who would give up their first born to see a magnificent sunset. 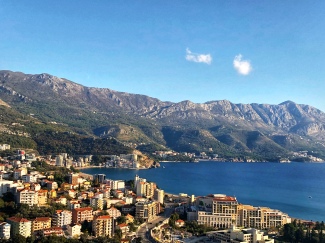 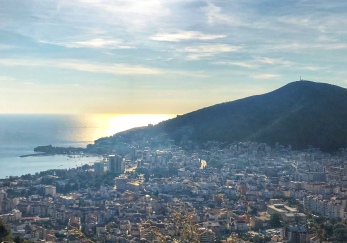 after ascending and descending along the hillside, i finally pulled up to the resort where i was greeted by the hotel manager who cheerfully said, “we have been waiting for you!”  thinking this alone was very kind and hospitable, i walked into the hotel and was promptly given some homemade lemonade, a snack, and immediately asked “so, what do you want to do while you’re here? tell us.”. once in college i was mistaken for jessica simpson on an overnight train from venice to rome because of my crazy blonde hair and petite frame, could this be one of those times again?  who did they think i was?  eyeing them suspiciously i replied, “welllll, what should i do?”  after a brief discussion that found me signed up for a wine pairing dinner with the resort’s chef that evening, a day trip to kotor and perast for the next day, and another cozy dinner by the sea after, i was informed that i was upgraded to the best room in the hotel, with views of the island, sea and my very own balcony that would make even juliet jealous.  again, who do they think i am??!!??  (full disclosure, as it happened, i was literally the only guest at the hotel.  i travel off-season for a reason, which meant i had a 5-star resort all to myself.  a place where the beckham’s stayed earlier in the year and tennis player novak djokovic was married a few years prior.  i mean, are you kidding me??!!  talk about only living once!!) 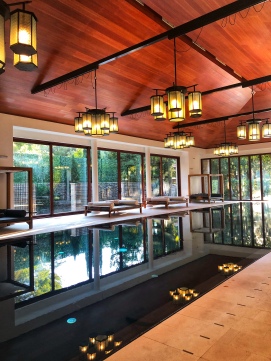 the view from the spa and pool 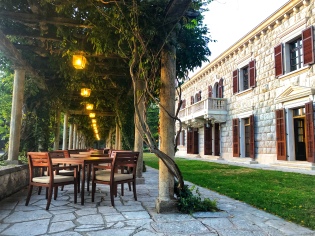 outside dining and lounge area

sunset and white wine at the hotel 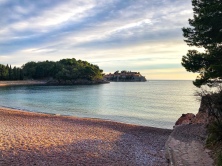 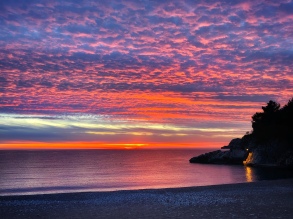 after i met with the aman team, the manager graciously gave me a personal tour of the island which was once an old fishing village that has since been turned into charming hotel rooms by aman.  i was hoping to say in one of the stunning stone rooms, but the downside of traveling off season is that these rooms are closed in the winter, guess i have to come back.  darn it.  the island was amazing, a scene befitting game of thrones, complete with multiple stone churches, cobblestone lanes, ivy and flowers creeping up all the walls, and everything detailed to absolute perfection.  it was amazing and pictures cannot even begin to do this place justice.  you really just have to see it to believe it. 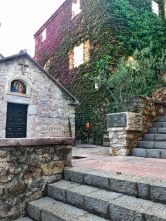 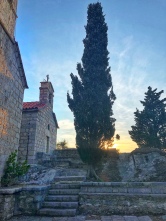 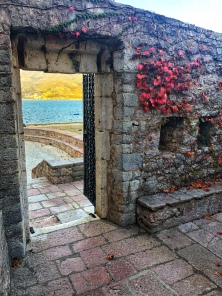 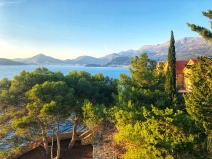 after my tour, i was ready for my private feast in the dining room, where i told the chef to make me whatever he would make for his mother.  paired with a croatian white wine, i had a greek salad with octopus that was so tender it melted in your mouth.  next up, local fish that was just as fantastic.  because i like to finish my night off with more cheese than most people eat in a year, i was served local cheese all from montenegro paired with local wine.  it was delicious.  all of it.  and i was there alone, at one of the most amazing hotels i have ever stayed at in my life, eating a fantastic meal that was all from montenegro or neighboring croatia.  i was literally in heaven.

as if that wasn’t enough perfection, the next morning i woke up to birds chirping and beautiful pastel skies over the island, no joke. i feel like i may have dreamed up this part of my trip and this is just my attempt at writing a fairytale because that is how unbelievable all of this is.  lucky lucky lucky me.

one of two balcony doors in my room

just your everyday morning views
after a quick breakfast, i was off to kotor and perest, two of the most historical cities in montenegro.  i had heard of kotor but really didn’t know much about it, and perest was a new one for me, so i went along with the plan presented to me knowing that after my first few hours at the hotel i would trust anyone here with my life.

so off i went like a baller in a tinted out black audi with a driver and a guide, both locals from the area.  i spent the 45 minute drive chatting with them, asking questions about the country, how it has developed over the past 10-20 years, wondering where they spend their holidays and of course what they thought about casino royale.  we exchanged stories, laughed a lot and had a really great drive.  i rarely do tours and i never have guides with me, but this proved to be a really wonderful memorable experience.

as we winded our way up to the view point over kotor bay i started to get really excited. i didn’t know what to expect and i certainly was not prepared for its beauty.  we were the only people up at the view point and it was quiet, peaceful and absolutely stunning.

the coastal town of kotor is surrounded by 15-17th century fortifications built during the venetian period.  the area is considered to be the southern most fjord in europe, and as a fjord lover i do have to say kotor has given norway a run for its money. sorry guys.  kotor also has an amazing preserved medieval old town with walkways winding around the hills above to old forts and looks-outs from centuries past.  it was amazing and truly one of the most incredible places i have seen in my life.  we went in churches, walked around the town walls, walked through the open squares and followed tiny pathways crisscrossing the city. the weather was perfect and i was in love. 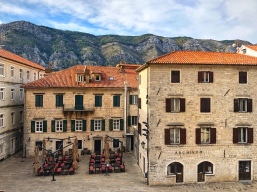 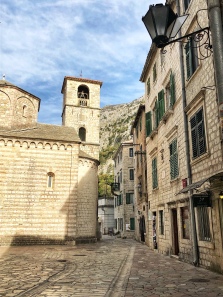 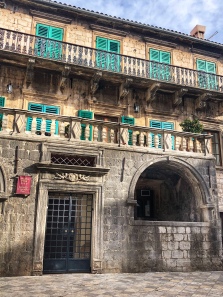 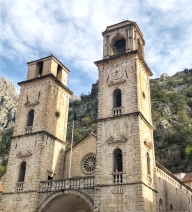 next up, and a short 15 minute drive down the bay, was perast, a small village surrounded by water and mountains that was giving me total hallstatt vibes.  also located in the bay of kotor, this village was charming, idyllic and everything that makes me happy in this world.  my guide, knowing the only boat guy working that day, convinced him to take us to one of the two small islands off the coast of the town (one of them, sveti dorde has a beautiful little monastery but cannot be visited by tourists).  we pulled up to the island, gospa od skrpjela, for a quick tour and a history lesson.  gospa od skrpjela, or our lady of the rocks, is the only artificially built island in the adriatic and was built upon a rock in 1452 after two venetian sailors unexpectedly found a picture of virgin mary on it.  since it’s founding, each time sailors would return from a successful voyage at sea they would go to the island and place a rock in the bay for luck. this is a tradition that still continues to this day in an event called fasinada, where residents take to their boats every july 22nd and throw rocks into the bay off the island’s coast. a pretty little side trip that was well worth leaving the resort for. 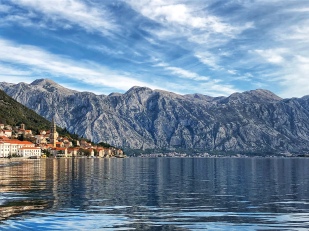 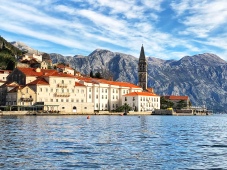 as i returned back to aman, i was invited by the manager to drive up to a lookout spot for an unbelievable view over sveti stefan.  from there i could see the island, the pink sand beaches of the village and the sunset over the sea.  an absolutely picture perfect way to end my afternoon in one of the most beautiful countries i have ever seen in my life.

my last order of business was to take a little walk around the area because i couldn’t possibly leave without some sort of solo exploration.  as i wandered a short distance from sveti stefan, i stumbled upon a tiny finishing village called plaža pržno that was just as picture perfect as the views i just left. there were little inns and restaurants along the small beach, and as the sun finally set over the horizon i couldn’t have asked for a more magical trip to magnificent montenegro.  this place is special.  it makes my heart soar, my eyes fill with happy tears and makes me want to tell the world how amazing this country is. from the people to the historic towns and villages, to the mountains and the beaches, just go.  seriously.  i have one more country to write about before i close out europe and without a doubt montenegro has won my heart. 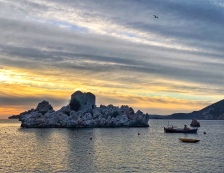