there are no strangers here; only friends you haven’t yet met.

i have a friend who lives in ireland. he’s all sorts of totally awesome and also loves to travel as much as i do. definitely my kind of guy. we ended up connecting over a year ago because he was also visiting all 51 countries of europe, so when he asked me if i had any interest in joining him and some of his siblings and friends in cyprus to celebrate his 51st country, i immediately said yes without even thinking twice. it also didn’t hurt that i needed to cross cyprus off my list as well, but that is beside the point.

i flew in from helsinki via kyiv on what had to have been the oldest plane i have ever been on in my life. i’m talking a soviet era, old school, does this thing even have seatbelts kind of airplane.  i landed in larnaca quite late, but thankfully in once piece, and ended up staying the night there with plans to meet up with my irish squad early in the afternoon. i was picked up in a van for 20 people (it was just me and my small carry on suitcase) and driven to my hotel through the dimly lit, windy streets of larnaca around 1AM, ready for some sleep but excited for what sort of adventures that the next few days had in store for me.  the solo traveller was about to be solo no more……

fast forward 5 hours (because i’m good at traveling and not sleeping), i was up at sunrise my first morning in cyprus and decided to enjoy some quick sightseeing and to take a brief glimpse of the beach in larnaca before my taxi driver whisked me away for what would be one of the most enjoyable trips i have had in a long time. cori enjoying a hot, sweaty island!?! how is that even possible? 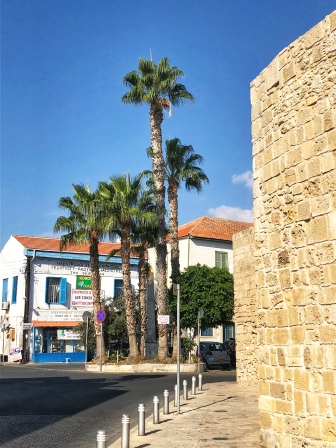 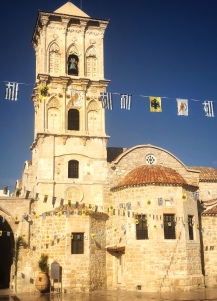 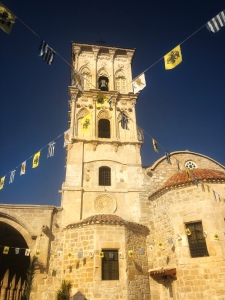 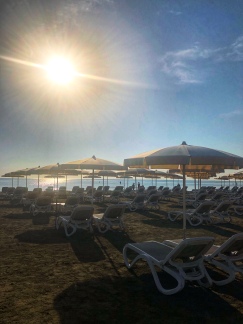 quick and easy, so long larnaca, ayia napa here i come….. so what does a group of five people from ireland and one american do on an island in the middle of the mediterranean sea for four days, you may be wondering? while most people journey to places full of sand and sun to escape reality, not our group. no way. one important thing i found out about my new crew was their love of escape rooms. i had heard of them, of course, but had never actually done one before. today, we were doing two (and would eventually do two more in nicosia) and i was a bit worried this was some sort of clever european ploy to keep an american locked up in an inescapable escape room but i was immediately told that this was a game that was taken very seriously.  as in, we aim to break records serious. i remember feeling nervous and wishing i had had at least seven drinks in me before the game began (instead i walked 2 miles in the sun with a bottle of water because waiting for the bus seemed like too much work), but was immediately put at ease when our leader, joel (shout out!!), was spelling our team name to the escape room employee…. “that’s H-U-G-H J-A-N-U-S.  wait, what? can you write that down for me?” she said. i knew from that point on that this was where i was meant to be. 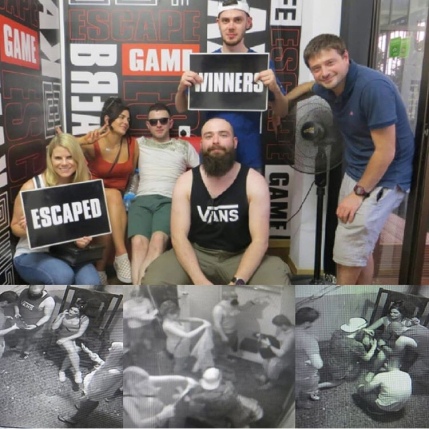 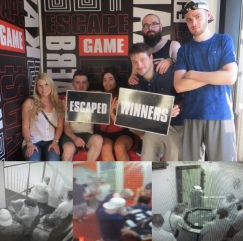 escaping escape rooms turned out to be easy as pie with these seasoned veterans (we missed the record by only a minute or two), but could i escape another secret love of theirs, the hard rock cafe? we spent a few hours at the good ole hard rock in ayia napa (which actually turned out to be a good choice, brightly colored cocktails and chicken fingers aside, because a medieval parade just happened to pass right by us as we were leaving) before heading to a local irish bar that was authentic enough even for my irish friends to enjoy.  as the night progressed, the beer and spirits were flowing and a singing battle eventually ensued.  our irish table (i had spent an hour trying to pronounce irish first names and cities – horribly incorrect, mind you – so i feel comfortable enough saying i was irish for this night) versus another irish table across the bar.  when the song “alice, who the fuck is alice?” came on it was all about drunken yelling pride.  our table was obviously way cooler, louder, better looking, younger and just all around more entertaining than the other one and all eyes in the bar were going back and forth like a tennis match watching us all.  it was epic and amazing.  laughing, drinking, singing, yelling, requesting random songs (NIRVANA!!!) and just enjoying life.  that was us, until around 3AM.

(the picture above is really the only one i have from that night, from the parade leaving the hard rock cafe, because unfortunately all my irish bar pictures were on snapchat and thus gone forever, but i do remember videoing the singing battle, drinking double cocktails (which my vodka soda with a lime was deemed “zero carbs, zero craic” by eoghan 😂😂😂), hearing reuben’s sister’s boyfriend pop in from a pool game to vocally request the most random songs for the singer to sing (and then yelling at him for not singing them), playing snapchat drawing games, and questioning why some guy was at the bar in cyprus’ main party city at 2AM reading a paperback book and not drinking anything #serialkiller.)

after a late night of drinks and tomfoolery, island fever slowly crept in and we decided to take a little trip to the capital for a few hours to keep ourselves busy and sane.  a taxi (by the way, their taxis there are these weird 1980s-looking black mercedes limos) was secured for our afternoon trip, but not before we had shots for lunch and i learned about 100 different ways to say you are either drunk or hungover in ireland. lunch and libations done, we were soon on our way for yet another adventure (fun fact, i have visited 46 of 51 european capitals with madrid, moscow, warsaw, zagreb, and ankara being the only ones left out).

arriving in nicosia was like having one foot in greece and the other in turkey at the same time. literally one part of the city was as greek as being in athens, while the other part was like being in istanbul.  it was an interesting experience having been to both countries and in both cities before my trip to cyprus.  while there was not much to see and not much to do in the capital, it was worth the short drive and the few hours we spent to see a city that truly is culturally divided (the guys were even fooled/entertained by the turkish ice cream man.. if you have been to turkey you know exactly what i am talking about here.  for those of you that haven’t been, i won’t ruin the surprise/annoyance) and i would highly recommend taking the journey to nicosia if you want to escape the beach and sun for a few hours. 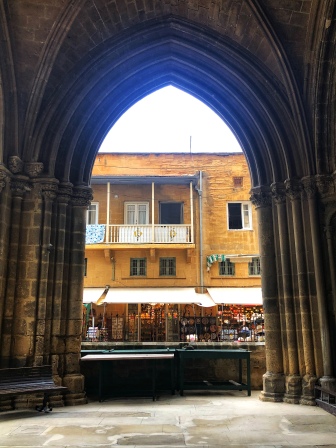 my last full day in my final greekesque country meant that because i am in love with greek food and like to eat local, i ended up having lunch solo by the harbor, enjoying a greek salad, grilled fish and local white wine (and of course was asked by the waiter, “just you?  are you alone?” in a disapproving, non-creepy way) before meeting up with everyone again for a quick afternoon visit to one of the most famous landmarks in ayia napa, the love bridge. 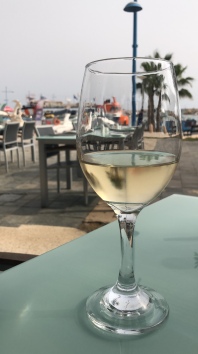 i can tell you that trying to get the perfect solo picture at this famous attraction, even in the off season, can test your patience.   we found it more entertaining to walk on the less crowded side where joel stuck his head in a random rocky opening, reuben and eoghen unsuspectedly posed for a bromance picture, and reuben snapped me out on a random rocky lonely ledge.  as we waited, we laughed at the boats, jetskis and people that just so happened to always be in the way, ruining everyone’s perfect pictures no matter what angle you were using. we did eventually make our way onto the actual love bridge but for some reason i don’t have any of those pictures.  guess someone was slacking off when they were supposed to send those to the group 😒😒. 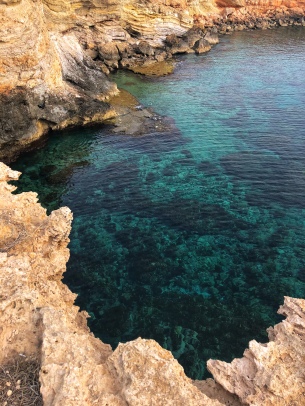 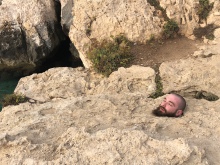 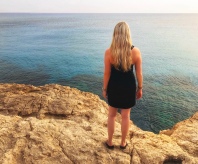 this was such an amazing trip, but unfortunately it was not all fun and games. two days before my friends were set to leave cyprus on their direct flight back to dublin (they planned their trip around this one direct flight home) they got word via text from a friend back home (not from the airline, mind you) that the airline had literally went out of business and completely shut down. wait, what? no warning, all flights immediately cancelled. extended holiday for them. i was actually sad to leave this sunny island and wouldn’t have minded being on a cancelled flight to spend more time with some truly amazing people, but i had a new country to visit and i was heading off to san marino via italy wondering if they would ever get a flight home (spoiler alert, they did).

travelling is all about experiences, both bad and good. on this trip, i hit european country #46, made friends for life and i can tell you right now i haven’t laughed as much as i did on this trip in a very long time. even now we all have funny text exchanges and laugh about our adventures in cyprus while planning upcoming trips to reunite. i have always thought that travelling was so much about “doing you” but as it turns out, you can meet some really great people on your way to finding yourself and sometimes those people make a new adventure sooo much better than it could have ever been going at it alone. so i want to thank my travel buddy and all around totally awesome friend, reuben, for the invite and thank his friends and family for being so cool with an american crashing their trip. it was such great craic and there is a 1000% chance i’ll be in a hoop with you guys again soon, on your side of the atlantic or mine. #thatass 🌈