always find time for the things that make you happy to be alive.

i’m pretty lucky because i have a good amount of friends that live in europe who always want me to visit, and when i do, they give me the local experience when i’m there.  i recently spent a long weekend in helsinki visiting a friend and even though i was just there a few weeks prior, finland never gets old.  i absolutely love helsinki.  it has such a great vibe, a ton of cool restaurants, awesome scandi shopping, and did i mention they invented the sauna? so what are you waiting for?  GET GOING!!

helsinki is a relatively easy flight from the east coast or from the midwest.  i have flown direct from chicago on finnair and from boston it’s only one stop through london or new york, both very do-able options.  once in helsinki, it’s an inexpensive (€5) 20 minute train ride from the airport to the central train station (they have two lines that go into the city so you don’t have to wait long).  you really cannot ask for a more streamlined way into a city from an airport.  (fun fact, i have walked to two airports in my life, both in africa – ouagadougou and cotonou).

upon arrival, i checked into my hotel (hotel st. george) which was absolutely fantastic. modern on the inside, classically beautiful on the outside.  hotel st. george is situated on a quiet street overlooking a beautiful small park and its location is the perfect spot to explore the city, go shopping, and meet your friends for drinks and dinner. it’s also a short eight minute walk from the central train station.  it has its own sauna, delicious restaurant and can i just take a minute to gush about the herringbone floors and picture perfect window views? i mean, come on. #lovelovelove 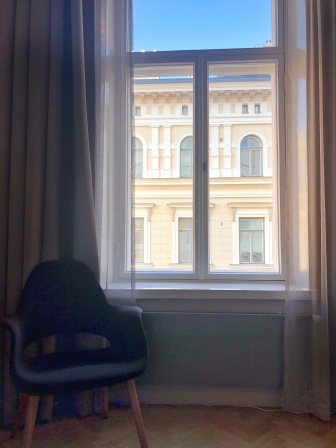 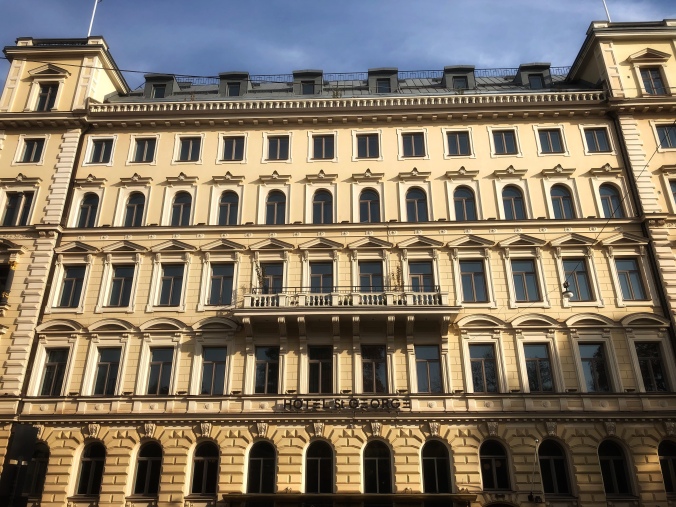 after freshening up and drinking two finnish coffees to stay awake, i met up with my friend for drinks at más rooftop bar (at the scandic simonkenttä hotel), which offers a pretty impressive view over central helsinki from their outdoor roofdeck. because he and i are both cold blooded, cold weather lovers, we sat outside, drank some beer and watched the fog overtake the city. it was a chilly october evening but we were just getting started. jetlag, smetlag. 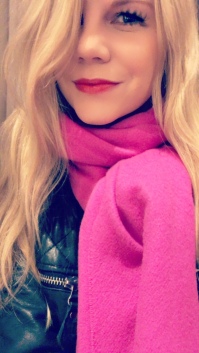 i just so happened to be in helsinki when the finnish national soccer team was playing a UEFA nations league game against their foe across the baltic, estonia. i was told for days leading up to this game that i would probably be disappointed, would see a 0-0 game, and that finland never wins important games, so i should set my expectations extremely low. because i live in boston and have seen so many championships that i have lost count of them all (haters gonna hate), i decided to bring my talents and luck to finland and even placed a bet on them to win, against all warnings from my friend.

janne, anticipating complete disaster, and me, anticipating a win due to my boston luck, proceeded to one of his favorite sports bars (where i was promised they have burgers as good as ones in america) to watch the game. because we were in finland and it is apparently rude to take a whole table for yourself when a restaurant/bar is crowded, even if you have a reservation, we were approached by three middle aged people who asked if they could join our table to watch the game. thinking we’d all be high fiving, yelling at the tvs in anger and cheersing beers, i reluctantly jumped on board with this whole table sharing concept (by the way, it was a booth which made it even more weird). much to my dismay and confusion, we did not exchange words with our boothmates the entire game. not even a “can you believe that dive?” or “that’s not a foul!”. it was bizarre. social norms say you share the table, but social norms also say you don’t speak to strangers. good ole finland, always keeping you on your toes.

as the game went on it looked like janne was going to be right, a 0-0 draw. at least i got a decent burger out of it, right? but wait a second, what’s that?!?!??? in stoppage time, in the 91st minute, there it was. finland scores, wins the game, janne and i freak out (again, no verbal exchanges with the people literally sitting inches across from us. maybe they were estonian spies?) and the bar goes crazy. i, of course, congratulated myself for brining the power of winning to finland (fun fact, finland are now 4-0 in the group. you’re welcome) and that was how i spent my first night back in finland. not too bad, huh?

oh i should also mention that i was introduced to the word “sisu”, which is the finnish word for “the spirit of never giving up and to always battle hard.” well done finland. 👏🏻

i was up early on saturday and took full advantage of the weather and my early rising to check out the fall foliage in helsinki. because this was my third visit to the city, i knew the lay of the land and which areas i wanted to visit. i walked around the city and the harbor for several hours soaking in the beautiful pops of color that surrounded me. i absolutely love autumn and seeing the leaves changing while being in a city i love was really something special. 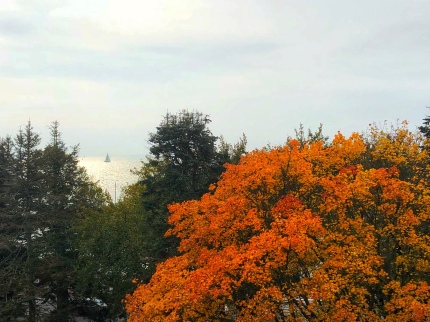 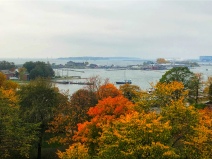 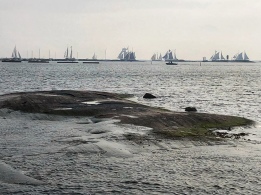 because sometimes i am human, i did decide to take an afternoon nap (and sauna!) before dinner out that night.  i can confirm that both the bed, shower and sauna at hotel st. george are all top notch.  so are the blackout curtains. i almost missed my dinner reservation. finnish hibernation at its finest.

after dinner there was a nighttime stroll around the city to one of my favorite places in helsinki, uspenski cathedral. you can walk up to the church itself for some nice views and then walk along the docked boats nearby. it’s quiet, peaceful and absolutely beautiful. i’ve been over to this area everytime i’ve been to helsinki and would highly recommend a walk around this part of the city.  on the way back to my hotel i passed by one of helsinki’s other famous attractions, helsinki cathedral, which seemed to glow against the dark night.  a successful saturday if you ask me. 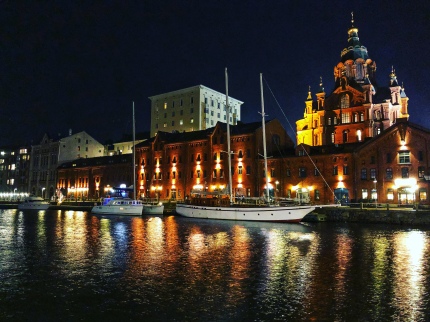 sunday was full of more local happiness as i met my friend in his neighborhood for lunch overlooking the sea. the weather was absolutely fabulous and it seemed as though the whole city was out enjoying this unusually warm october weekend. we had a salad in the leafy suburbs at cafe torpanranta, walked around his neighborhood and he told me how he and many others lined up to see president trump when he stayed in the area a few months back. even trump likes finland, and he hates everything. 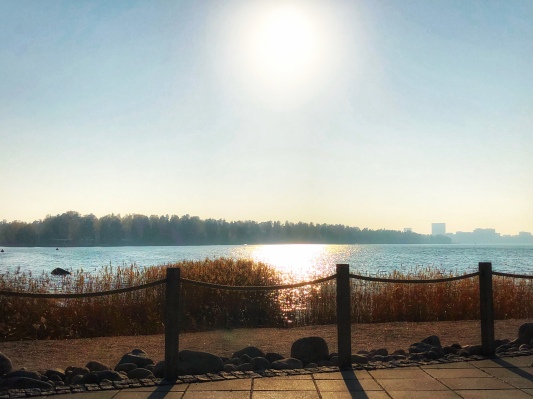 my last order of business was going to löyly, which is a super modern finnish sauna on the sea (they also have a restaurant and bar), about a 30 minute walk from my hotel. since i was with a local i let him lead the way and we spent our afternoon going from the steamy sauna to dipping in the 46F/8C degree sea.  i was told i had to go all the way under for maximum benefits, which i did…three times. the last time the sky was getting dark and the moon was out and here we were, being either really badass or total idiots jumping into nearly freezing water because that’s what you do if you’re a true finn. 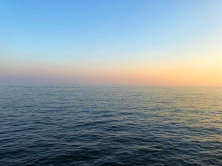 after our sauna experience, we went over to the in-house restaurant and swiftly ordered a vat of salmon soup, which was accompanied by delicious finnish brown bread and even better butter.  it hit the spot and made me warm, cozy and happy.  i couldn’t help but think to myself what an amazing weekend i had just had.  finland really is a very special (and delicious) place, even in the off season.