if you know you want it, have it.

hungry for hungary?  me too.  it’s been on my list for a long time so when i finally landed in budapest i couldn’t have asked for a better start to my monday.

in three words, budapest. is. awesome.  go there.  book a ticket and don’t look back.  in fact, i’ll book it for you because i am so confident you will love it.  there is so much to see that a few days will not be enough.  buda castle, the hungarian parliament building, matthias church, heroes’ square, st. stephen’s basilica, and the fisherman’s bastion are all must-see sights…..and that doesn’t even include walking along the danube river both during the day and at night, getting lost on the small cobblestone streets, or enjoying local food, wine and beer.  all of which is so freaking good.  and speaking of walking the city at night, just do it. (this was the one recommendation from german-norwegian tim, who had been to budapest before). evening strolls are the best and budapest does it right.  even through the foggy, cloudy skies, seeing the city lit up at night was pure magic. 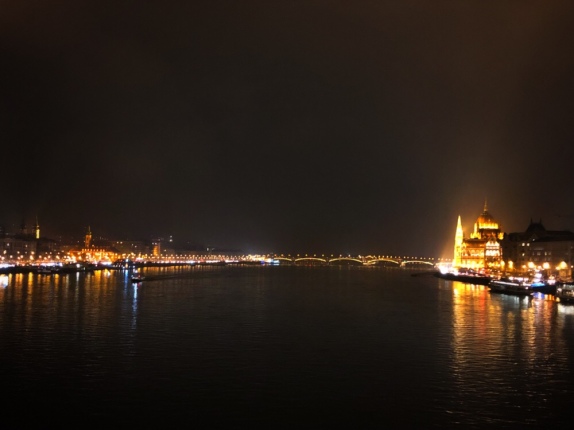 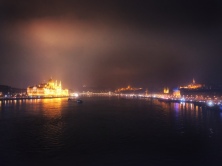 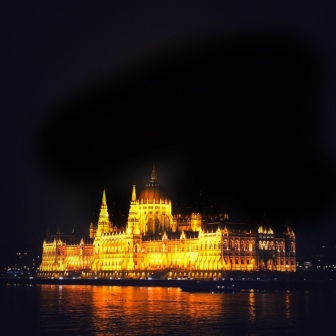 don’t get me wrong, budapest is pretty fantastic during the day also.  i think one of the most recognizable images across europe is the hungarian parliament building, and it did not disappoint.  nestled next to the danube, this gothic wonder is the largest building in all of hungary and the tallest in budapest.  pretty impressive, i must say.  while it’s amazing to see it up close, the best views are across the river where you can see just how massive the structure truly is.  i wandered around the river’s edge, exploring small streets, tucked away churches and finished up by going full paparazzi on the lions on one of the many bridges connecting buda and pest.  don’t worry though, i captured their good side. 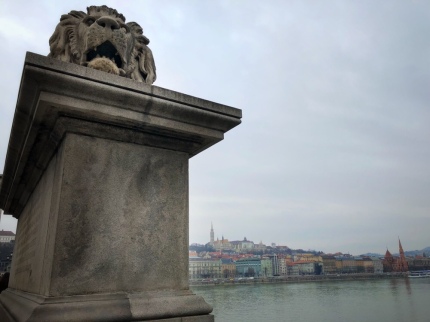 ukraine always makes me laugh.  several years ago my ex and i would play the game of risk with a friend and three things would always happen.  1) whoever got up first to get a beer or use the restroom was always ganged up on and the first to be conquered, 2) the game always ended in a fight between someone. the amount of times someone stromed out of the apartment cannot be counted on just two hands, and 3) 9 times out of 10 the winner always held ukraine.  a risk powerhouse, and pretty awesome place to visit in real life.  there has been so many negative things in the news over the past few years about ukraine and kyiv but from everything i saw, it was worth the visit and even a return visit.  kyiv is a ginormous (one of my absolute favorite words, by the way) city, full of people, traffic, and unexpected sights.  my flight was delayed and i lost a few hours, but the snow, dark and cold weather didn’t keep me away.  i might be a vampire because i feel like i thrive in foreign cities at night.  it tends to be less touristy, less crowded and more peaceful when you are roaming the streets and sights.  kyiv was a quick trip and i definitely did not give it the attention it deserved, but i had a very important flight to catch to a place i have been excited about for many, many years…. 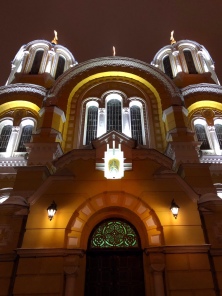 i am finally here!  i’m in love, and i don’t care who knows it.  where is here?  georgia….the country.  this was one of my top 5 places in the world i have wanted to see.  i saw some random pictures 5-6 years ago and wrote down tbilisi in my blue moleskine notebook and knew i had to get here someday.  i cannot even explain how awesome tbilisi is.  it’s not a pretty, new, sleek, shiny city.  it’s not paris.  it’s not copenhagen.  it’s definitely not moscow. it’s tbilisi.  it’s gritty and built on the sides of two mountains with a river running through it.  it has crazy drivers, unpredictable weather, a beautifully strange language, amazing beer, gorgeous sights and awesome people.

i booked a small, fantastic hotel (kisi hotel) and after a san francisco-worthy steep ride up a tiny street, i walked into the quaint hotel lobby.  the girl at reception took one look at me, cocked her head and said, “you’re cori?” “yes,” i answered, confused and impressed at the same time.  she replied, “oh, i thought you would be a boy.”  thanks mom and dad, i appreciate that even in georgia people think cori is a boy’s name.  story of my life.  as i continued checking in, she looked at me with a very serious face and asked me point blank, how had i heard of georgia and why was i there.  where do i even begin??

my day started with daylight sightseeing, but i literally got so lost throughout the day that i ended up on the other side of the river without knowing it.  all of the small alleyways looked the same and i was definitely turned around and upside down, so i decided to stop at a random bar for a quick beer to regroup. one turned into three as it started to get dark and i still wasn’t sure how to get back to my hotel.  i figured if i walked right instead of left i would at least get somewhere new, which i did, but still not where i wanted to go.  out of the corner of my eye something caught my attention and i decided to carry on.  best decision of the night (and that is saying something because the beer here is fantastic) because where i ended up was on top of a small lookout area where i could see tbilisi lit up down the river.  it was amazing and my pictures do not do it justice. my favorite city i have visited in europe by far. swoon 😍 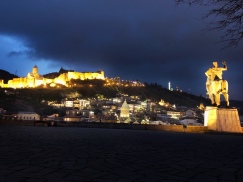 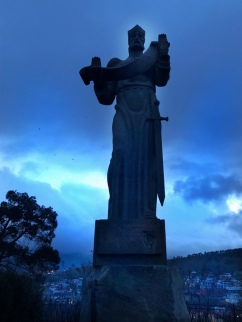 i eventually made it back to my hotel room where i would spend the night with my valentine, georgian beer (did i mention i was in tbilisi for valentine’s day alone?  and people say i’m not romantic…). 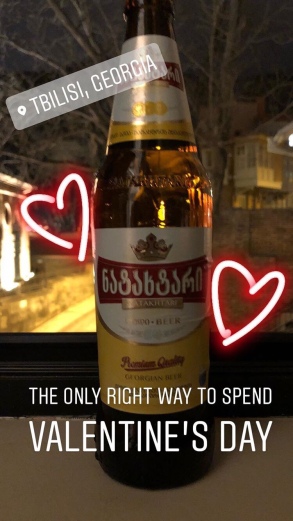 i was off to baku the next day and i literally did not want to leave georgia.  i definitely did not spend enough time here and am already dying to return.  i cannot really explain why i loved it so much here but the charm of the city that many people in the western world haven’t even heard of captured my heart.  it was everything and more than i expected, so if you want to do something a little different in europe, this is the place to go.  you will not be disappointed, and on top of that, you’ll leave already planning your next trip back. trust me. 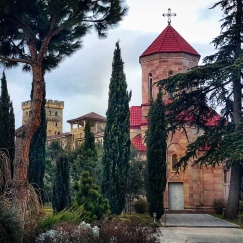 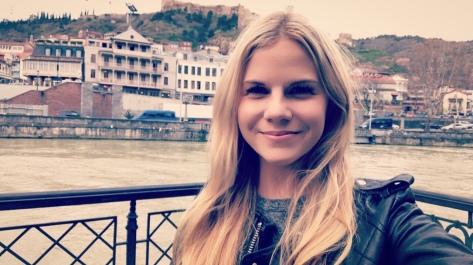 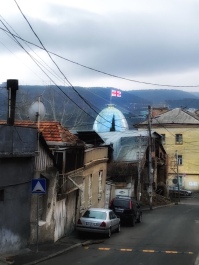 azerbaijan was my last stop:  9 countries, in 11 days, on 11 flights.  i was officially exhausted. i had been across the world, across europe and all i wanted was a good night’s sleep, a beer and a low-key couple of days.  thankfully, that was achieved within my first day here.  i saw a new city mixed with old.  streets paved in tile and marble, and mosques that looked as though they have stood the test of time.  a very interesting city of contrasts, and by far the most cosmopolitan city in the area. 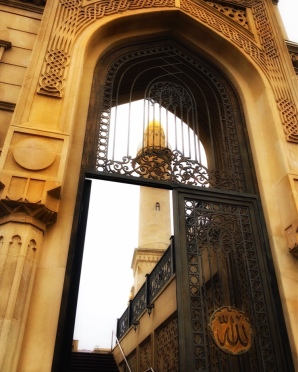 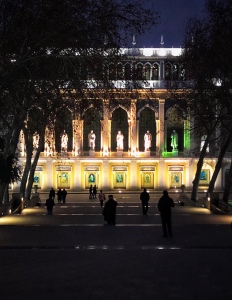 my last “night” in europe consisted of a flight at 450am so i decided the best thing to do was to stay up all night and plan on sleeping on my flight back to frankfurt.  i got a quick bite to eat nearby my hotel (sapphire city hotel) and went back to my room for a shower and a glass of wine….or two.  i was relaxing in sweatpants when an invitation through instagram came in asking if i wanted to meet up for hookah, tea and dessert.  if you know me, you know i love all of those things so how could i possibly turn that down?  i mean, i did need to stay up all night so that seemed like a good idea at the time.  lets just say i took two showers afterwards and still smelled like cherry smoke.  luckily for everyone on my lufthansa flight i was alone in my row and was able to keep my secondhand smoke to myself for the next 8 hours.  either way, not a bad way to end an epic solo trip through europe.

this trip really was one of the best i have been on to date.  i saw so many amazing places, crossed a country off my top 5 list, met some incredible people (one of which i have now seen every month since this trip), and had now successfully completed by 3rd solo travel country conquest.  so, where to next?  the outermost corners of europe, of course.  kazakhstan here i come, wawaweewa!!

keep reading, keep checking in… i promise it gets better.

UP NEXT: greetings from the outermost corners of europe.